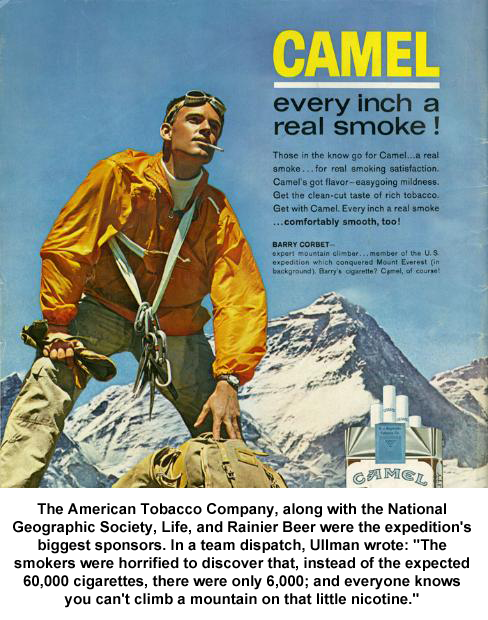 On May 1, 1963 Jim Whitaker became the first American to summit Mt. Everest along with Sherpa Nawang Gombu by the South Col route that’s popular today.

Three weeks later a Tom Hornbein and Willi Unsoeld, who were from the same expedition as Whitaker, began a stunning assault on Everest’s then unclimbed West Ridge. They reached the summit by the West Ridge on May 22nd – still today one of the greatest feats in mountaineering history.

Of course every professional mountaineering expedition has sponsors to offset the costs. With the ’63 American expedition to Everest Camel cigarettes was one of the sponsors.

Here’s the ad. The caption I added from an article in Outside Magazine. It reads:

The American Tabacco Company, along with the National Geographic Society, Life, and Rainier Beer were the expedition’s biggest sponsors. In a team dispatch James Ullman (the team’s historian) wrote: ‘The smokers were horrified to discover that, instead of the expected 60,000 cigarettes, there were only 6,000; and everyone knows you can’t climb a mountain on that little nicotine.’

My favorite quote (@ 2:22): “Facebook is integrated right into iOS 6. So get ready to read more sh*t you don’t care about.” Made me laugh out loud. So true, so true.

Another good one: “In iPhone 5 we said, ‘f*** you to Google Maps’ and invented something called Flyover. Plus we have turn-by-turn navigation spoken by Siri. Hit it bit*h.”

They call him ‘Tennis’ Greatest Entertainer.’ His name is Mansour Bahrami. He does some amazing tricks. And while some of this is surely staged, he also appears to be a pretty good tennis player as well – having reached the 1989 French Open Doubles Finals. His reverse serve is great. As are the impressions of Becker and McEnroe. And you gotta love the slow motion mimic. Really funny. Love to see him live.